UpLabs is a website for designers and developers to find and share resources to build apps and sites.

Every day, UpLabs curates the best resources for the Web, iOS & macOS and Material Design: user interfaces, experiments, open-source apps, libraries and ready-to-use products… to name a few! a few! 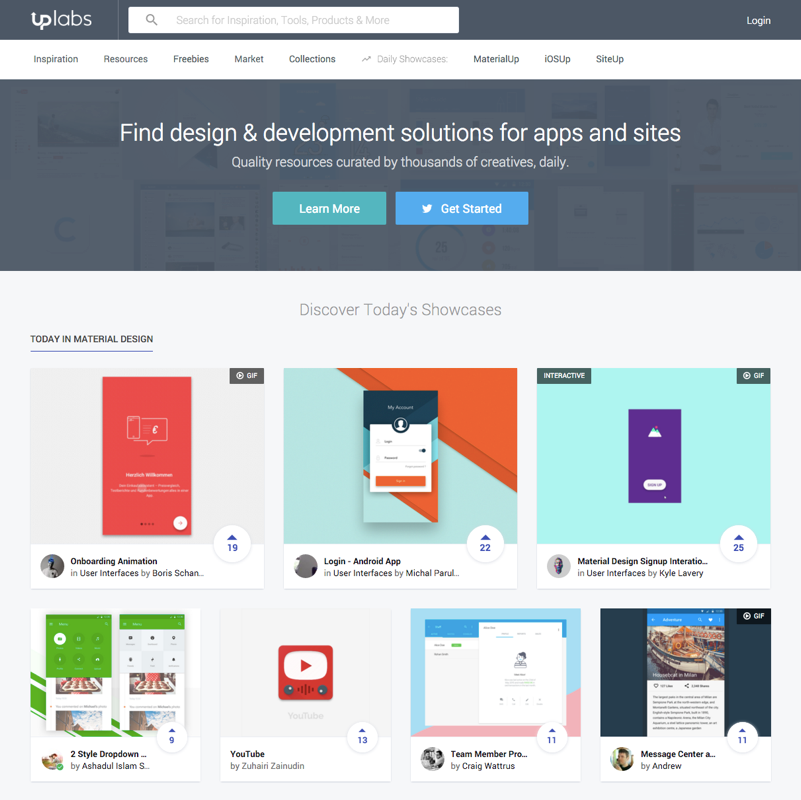 Meet the team behind Up

UpLabs was created by Matt. Matt’s always had a thing for building little handy tools for designers and developers – like WOW.js, MiniJs, MiniBoilerplate. They were lucky to live and carry projects around the world, inspiring them to build a place that would connect creatives and bridge the gap between design & development.

In December 2014 Matt created a site that listed one good Material Design example a day, as well as Material Palette and Material Icons. From there, the community grew incredibly enthusiastic – in July 2015 we were even lucky to host a Q&A with Mike Dennis from Google Design! In September we opened two more showcases, for iOS and for for the Web, and a Store for creatives to earn revenue from their work.

For those of you who don’t know… We are now UpLabs!


MaterialUp began in 2014 as a platform solely for sharing material design resources.
Then came Uplabs. This rebranding stemmed from a desire to create more of an umbrella brand. So, instead of offering only material design resources, Uplabs grew to encompass a wider range of design resources. Then, Uplabs became Up.
Nowadays, UpLabs is a website for designers and developers to find and share resources to build apps and sites. We are very excited to share that UpLabs now offers resources for iOS, Android, web, and brand illustrations to name a few.


We’re really excited for what’s ahead, thank you for visiting!

You’ll find us getting overly excited about great design & development at @mat. For deeper discussions, shoot us an email us [email protected]

© UpLabs Inc. is a Delaware Corporation.